Bringing Peace and Reconciliation to African Nations in Conflict

The world’s youngest nation, has been plagued by unrest since its inception. Sadly, news of violent outbreaks has become all too familiar in South Sudan. African Enterprise was among the first responders to offer aid to refugees when tribal violence began in 2013.

Since then we have been walking with the citizens of Juba by leading a grassroots movement of godly leadership through peace and reconciliation trainings. The results from these initiatives have been inspiring but it is clear there is still much work to do. With over 50 years of experience in evangelism and peace-building African Enterprise passionately believes in power of godly leadership in transforming nations.

“OUR HOPE FOR SOUTH SUDAN IS THAT LEADERS WILL ARISE IN ALL SECTORS TO LEAD THE NATION FROM FRAGMENTATION TO UNITY, FROM DESPAIR TO HOPE, FROM PAIN TO HEALING. WE IN AE HAVE PLEDGED TO STAND BY THEM IN THIS HUGE TASK OF REBUILDING AND HEALING SOUTH SUDAN. WE CANNOT DO IT ALONE.”

AE is actively engaging grassroots and national leaders as well as church leaders to speak about Peace & Reconciliation and the value of Righteous Leadership. During our workshops we address the following issues:

AE’s Impact at a Glance

AE has been working with political leaders at both National and State Legislative Assemblies. We’ve played a pivotal role in planning and mobilizing the National Prayer Breakfast in Juba. As a result of this effort a group of Christian Parliament Members meet weekly to pray for peace in their nation.

Recently the new Speaker of Parliament, Rt. Hon. Antony Makana has formally requested that African Enterprise come alongside his parliament in the task of rebuilding and reconciling the nation of South Sudan and in enhancing good values for governance among its leadership.

AE CEO, STEPHEN MBOGO SAID, “I SEE AE’S WORK IN SOUTH SUDAN INCREASING DRASTICALLY IN THE COMING DAYS. WITH THE SPEAKER’S ENDORSEMENT OF OUR WORK AND LONG-TERM PROGRAMS SUCH AS THE NEXT GENERATION LEADERSHIP PROGRAM, I SEE OUR WORK BEING ENTRENCHED IN THE NATION AND BEARING IMMEDIATE AND LONG TERM RESULTS.”

Immanuel, an AE Peace and Reconciliation student, has begun an inter-tribal soccer team – one of the first of its kind in Juba – and has put his new found skills to good use.“I love my country; I love South Sudan”, Immanuel said. “What has happened here has broken my heart. When I heard about the peace and reconciliation trainings by African Enterprise I was so excited; I couldn’t wait to attend. The trainings gave us better understanding about the root cause of the violence and how to change it. 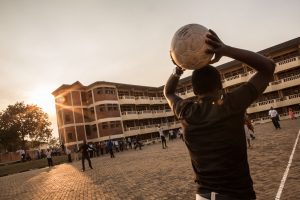 AE FACILITATORS CHALLENGED US TO BE AGENTS OF PEACE IN OUR COMMUNITIES, RESISTING TRIBAL DIVIDES

AE facilitators challenged us to be agents of peace in our communities, resisting tribal divides. Starting this team was very challenging at first because many of the youth refused to associate with their teammates from different backgrounds. I nearly gave up but thanks to the AE facilitators and other trainees I was encouraged to keep going. I am constantly reminding my players to pursue peace using what I learned through the training and I am so happy to say that they are all beginning to understand the importance of working together, regardless of their differences!

We still have difficult moments, like when there is a disagreement during a match, tribal issues often rise to the surface but God is always faithful. We have begun to build common understanding amongst the players and make the youth aware that their prejudices and negative tribe and ethnic statements cause division and ultimately bloodshed. I believe that tribal differences are our default setting here in South Sudan. We have to learn to change our mindset about these things and without the help of AE it would have been impossible.”

Get the latest news, videos and insights from African Enterprise.